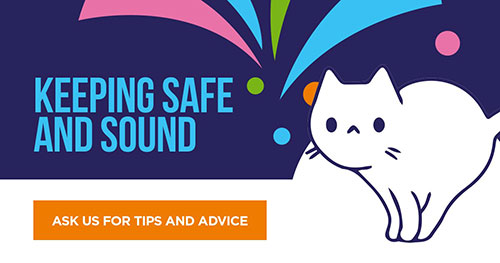 With autumn upon us, the nights getting darker and the temperatures dropping, we’re soon going to be moving towards celebrations that involve fireworks.

In the UK many towns and cities plan celebrations for Bonfire Night right through to New Year celebrations at the end of the calendar year. As a pet owner, it’s important to be aware of the celebrations in your area and also how to make your pets as safe and comfortable as possible.

Fireworks and other loud repetitive noise can cause a lot of stress, particularly in dogs and sometimes in cats. To help determine whether your pet is suffering from anxiety, here our the signs to look for….

Signs of anxiety in dogs:

Signs of anxiety in cats:

We’ll be sharing our top tips in preparation for this year’s festive season soon.

If you are unsure about your pet’s behaviour or how best to manager their anxiety,  contact us for more information. 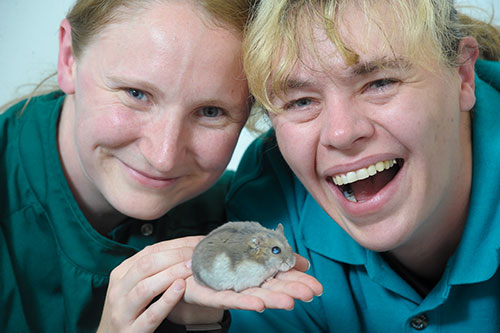 A tiny 10-month-old pet hamster has had an eye removed in an extremely rare, life-saving operation.

Tom, a Russian Dwarf hamster, is thought to be one of only a few hamsters in the country to undergo such an operation, after he was taken to our Stafford branch by concerned owner Sarah Matthews.

Sarah had spotted a white cloud covering part of her pet’s left eye and vets at D&T Veterinary Centre carried out an examination on tiny Tom, who measures just 6cm and weighs around
30 grams.

After the condition failed to clear up following the initial prescription of eye drops, Sarah was informed the best way to proceed was for vets to remove the eye due to the clear pain and discomfort Tom was in.

Faced with the agonising decision of either putting her pet through rare, high-risk surgery to remove his eye or have him put to sleep, owner Sarah, of Stafford, had no hesitation in asking the vets to try to save the life of her beloved furry friend.

Sarah said: “I knew something wasn’t right because, although he didn’t seem in any obvious discomfort, there was a white cloud on his eye.

“The vets were really good and explained to me that without the operation he may not survive. I’ve had him since December and he’s such a little character, I didn’t think twice in agreeing to the surgery.

“I was really nervous about the whole procedure because he’s so small and the vets explained he may not survive the trauma of having the anaesthetic. We picked him up in the afternoon and by the following morning he was back to his usual self – you wouldn’t know anything had happened to him!”

Sarah Sheppard, clinical lead at D&T Veterinary Centre, carried out the intricate 25-minute procedure to remove Tom’s eye, which involved wearing magnifying goggles and needles as fine as a hair.

She said: “Tom was suffering from a luxated lens which causes an increase in pressure (glaucoma) within the eye and leads to the eye swelling. In most cases this becomes really painful. He wasn’t eating and was a bit grumpy, which is understandable given the pain he must have been in.
“We decided the quickest and easiest treatment in terms of pain relief would be to remove the eye. Otherwise, the pressure build-up would have caused the eye to bulge and probably rupture.
“It was wonderful Sarah allowed us to operate because many hamster owners can be put off by the cost and also the fact that anaesthesia is notoriously difficult with rodents.

“The operation went well – it’s actually not a difficult surgery, it was just obviously quite fiddly because Tom was so small. It all went very well, although he did require some CPR because he struggled with the anaesthesia. A couple of hours afterwards he was back to normal, so we are very happy with the outcome.

“I’ve never carried out that surgery on a hamster before and I don’t know of any other such cases in our practice, so Tom has definitely been a pioneer!”