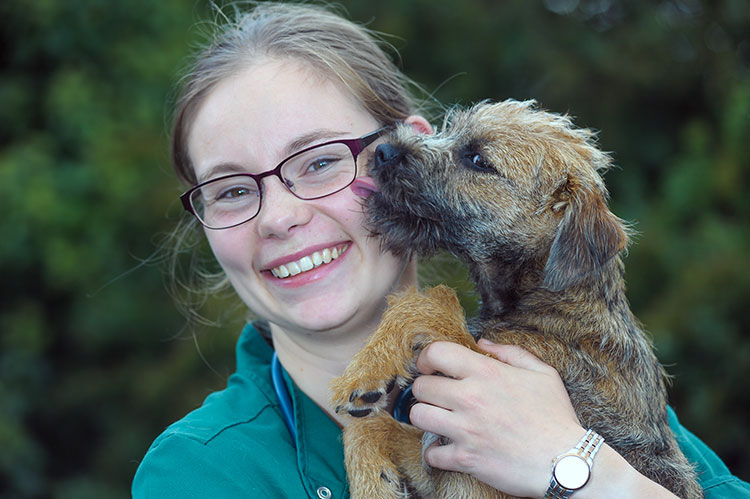 Jenny Cooper, our newly-qualified vet here at D&T Veterinary Centre was thrown in at the deep end when she had to perform emergency life-saving CPR on her own pet dog.

Jenny was on call at the Rugeley branch when she received a message from home to say her Border Terrier puppy Haggis was acting strangely.
By the time she got to him, the little pup was having muscle tremors and was vomiting – symptoms which were put down to him eating something mouldy he had found on the family farm.

Jenny rushed Haggis into work, by which time he had suffered a seizure and his heart stopped due to being poisoned by the fungus he had eaten.
Jenny performed successful CPR and, together with small animal clinical lead Sarah Sheppard and nurse Rebecca Cox, anaesthetised Haggis in an attempt to control the seizures.

However, he continued to seizure under anaesthetic, so the team called in the specialist referral team at Willows Veterinary Centre in Solihull.

The neurology team there supplied some powerful drugs for Haggis – who by now was too unstable to be moved – which helped stabilise him.

After 10 hours of seizures, Haggis was finally well enough to be woken up at 5am the next day and is showing no ill effects from his ordeal.

Jenny, 23, who joined the team here at D&T Veterinary Centre in the summer following her graduation from the University of Edinburgh, said: “Amazingly, Haggis appears to not have sustained any lasting damage and is back to his normal cheeky self.

“I’m extremely grateful to Sarah and Rebecca for pulling an all-nighter and helping save Haggis, and to the neurology team at Willows.

“Willows gave us advice and supplied us with some specialist drugs which undoubtedly helped save his life.”

Haggis is now recuperating at home with Jenny and her and fellow Border Terrier puppy Nessie.