Max, a 14-year-old Border Terrier from Staffordshire, is living proof that a diagnosis of diabetes need not be a death sentence for a dog, even for one of mature years.

Thanks to a carefully managed diet, regular injections of insulin given by his owner, Jude Preston, and regular checks at D&T Veterinary Centre, Max continues to live a joyful and active life.

Max was first taken to our surgery at the start of the year after Jude and her partner, Graham, who live near Rugeley, noticed that he was urinating a lot.

Tests revealed he had type 1 canine diabetes, which presents itself in the same way as human diabetes. The pancreas doesn’t produce enough insulin, meaning a diabetic dog’s body cannot control the levels of sugar in its blood.

Diabetic dogs are also very prone to suffer from other health problems. For Max, that included cataracts that eventually led to him going blind.

However, the most important thing for confirmed animal-lovers Jude and Graham – they have two other dogs and five cats – was that Max should continue to have a first-class quality of life. And they have made that possible by adapting their lives to Max’s needs.

Jude, a lecturer in work psychology at Aston University, said: “You can manage it, you just have to think ahead.”

Max needs two injections of insulin a day, which are administered by Jude after being trained by Donnachie and Townley staff. “It is quite straightforward. The needle is very fine, the thickness of a human hair, and Max doesn’t seem to feel it.”

Max also needs a special diet and his meals have to be taken at 12-hour intervals, plus or minus 30 minutes. That 30-minute variance allows for meal times to be adjusted slowly over time so as to allow for changes in the family’s routine such as working hours or holidays.

Max has regular, day-long check-ups at Donnachie and Townley to monitor the level of sugar in his blood. “Initially, they were weekly,” said Jude, “but as his sugar level stabilised they were needed less frequently, reducing to one every four or even six months.”

However, there have been relapses. “It is important to be alert for even the smallest of changes in his condition as it could be the beginning of something major which requires the attention of a vet,” said Jude.

Although Max has gone blind, he enthusiastically chases around his large, securely fenced garden, relying on his senses of smell and hearing, and plays with his special sensory balls.

Max’s vet at D&T Veterinary Centre, Laura Hodgkiss, said: “Most pets require injections twice a day, about 12 hours apart, after a meal. Your vet will show you how to give insulin injections and carry out any urine or glucose tests.

“Many pet owners are understandably concerned about giving injections at soon, but soon get the hang of it.

“As Max has shown, with the right medication, most diabetic dogs go on to lead happy and active lives. But there are some health problems that they will be more prone to than dogs without the disease. Like Max, they often develop cataracts rapidly because the sugars affect their eyes. Surgical correction is available but many dogs cope well with loss of sight as their other senses are much more acute than those of humans.” 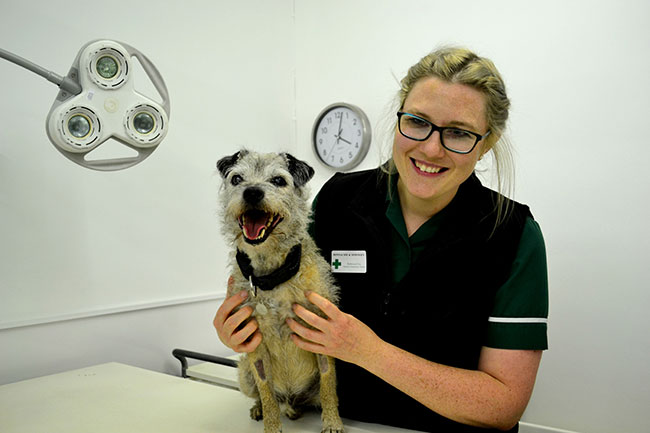